skip to main | skip to sidebar

When Naughty is Finally Something Typical

Kimberly will be going to Kindergarten in 3 months and 6 days.  Since she has Down Syndrome, this has meant lots of evaluations now, and her IEP meeting in less than 2 weeks.

It took the school psychologist less than 15 minutes to conclude that she would need significant academic assistance.  When his standardized test had him ask her to point to a child cleaning herself (a kid in a tub, one of six options), she instead pointed to the baby crying in a crib and said, "Baby sad, he need a nap."  When he told her to point to something that flies (a plane, again one of six), she instead pointed to the one thing she didn't recognize and said, "What's this?".  15 minutes, 4 "wrong" answers in a row, and she was done.

I find it ironic that we all know she has a disability and the point of all these assessments is to determine what accommodations she will need, yet the test itself is so set in stone that he has to read word for word what to ask and not deviate or note her creativity and inquisitiveness.

We had two independent assessments done so I could have something for comparison, and two assessments by the school, in addition to the one by the school psychologist.  So I've heard where she is placed developmentally, I've read the reports that show where she is lacking, and I have a meeting coming up where I will again have it all laid out for me.

And yet I still intend to insist upon full inclusion in the general ed kindergarten classroom.

Tonight though, little Miss Kimberly was very typical, in that she was quite deceptive and naughty.

Unfortunately it was not a praiseworthy moment, much as I wanted to cheer her ingenuity and "typical" behavior.

Kimberly didn't want chili for dinner.  Period.  She knew it would take a bit of trickery to get out of eating it.  So Kimberly drank her water, spooned her chili into her cup, showed me her empty bowl and said, "All done!" 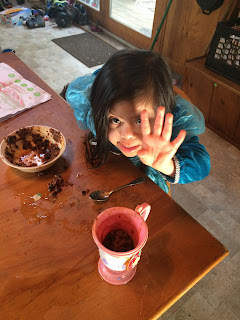 She was clearly a wee bit unrepentant.  While I did take a photo, I didn't crack a smile.  I poured her chili back into her bowl and told her to eat. 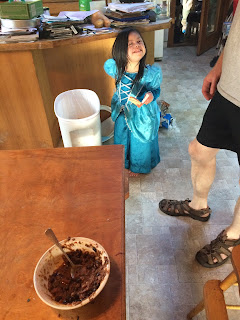 She tried a second time for Daddy, even hopping down and grabbing a small Bible to read, hoping to really add to the cuteness.  It didn't work, and the chili was eaten.  Mostly.

While Kimberly does have a problem with articulation and core muscle strength, as evidenced by the phrases "cluster reduction", "devoicing", "replace fricative and affricate sounds", as well as being "avoidant of the prone position"...while she has these and more deficiencies,  I know, without a doubt, that she is one smart little girl.

She will do just fine in school, and I'm sure will teach her peers a thing or two about acceptance and unconditional friendship.  I just hope she doesn't teach anyone her tactics for not eating an undesirable meal.
Posted by KellyL at 7:37 PM

Email ThisBlogThis!Share to TwitterShare to FacebookShare to Pinterest
Labels: down syndrome, Kimberly

"He has shown you, O man, what is good; and what does the Lord require of you but to do justly, to love mercy, and to walk humbly with your God?" Micah 6:8

"Pure and undefiled religion before God and the Father is this: to visit orphans and widow in their trouble, and to keep oneself unspotted from the world." James 1:27

"...learn to do right! Defend the cause of the fatherless, plead the case of the widow." Isaiah 1:17

"I will give you the treasures of darkness, riches stored in secret places, so that you may know that I am the Lord, the God of Israel, who summons you by name." Isaiah 45:3

The Lindsay Kids-- All Nine!

Zachary, with Leif velcroed on

Nikita, our third blessing, and a horse fanatic

Amelia, who thinks she is co-mama 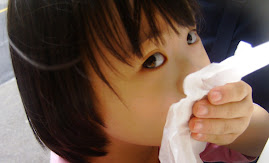 KellyL
We are a family blessed with nine children. Four of our blessings were born to us, and five joined us through adoption. They have Down Syndrome and are such a blessing to us and everyone who knows them! Jamie and I have been married 20 years. He is a high school teacher, and I stay home to school the children. We are now seeking to live together in a way that is pleasing to Jesus as our family encounters new challenges and embraces what each day brings.